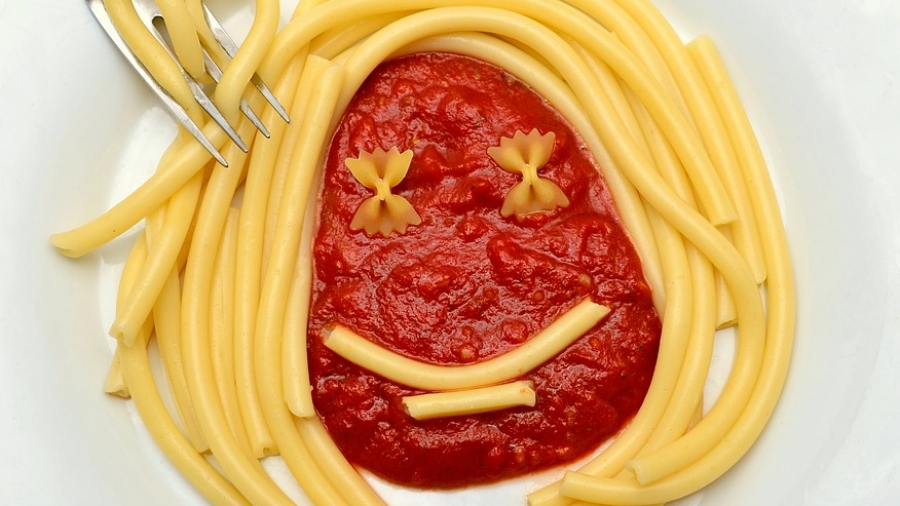 by terrymaggert with 4 Comments random thoughts

I made a large bowl of rather excellent pasta, if I may say so. Allow me to walk your through the process, which was chaotic but ultimately packed with flavor and excitement. Let’s begin by discussing the ingredients.

For what I’m calling “Chicken Hilarity”, you will need:

Chicken breast, sauteed in olive oil, salt, and basil. (I couldn’t find the chicken, but realized I’d left it in the car, along with eggs and hummus. Since the temperature was close to 20F, the chicken was almost frozen. I thawed it in the pan while cooking, and it came to a lively sizzle.

Spicy marinara (I make my own).

Combine these ingredients in a large bowl, cover with fresh Parmesan and crumbled feta cheeses.

As I sat down to eat, several events began to unfold that altered the outcome of my meal.

It was at this point that I was able to eat. I consumed, as usual, the entire portion of pasta, which means all of it.

And then I began to feel somewhat. . . uncomfortable.

Could it be the stomach flu? Unlikely. We disinfect everything with maniacal abandon, and my discomfort was completely in my belly.

It wasn’t the chicken, despite being left in the car, because the temperature was WELL below freezing and–

Wait, what day was it? Friday?

I did some calculations. I’d gone shopping on. . .Wednesday.

Thursday, the temperature had been nearly 70F.

I’d left the chicken in the car for two days, not one, and it had been rather tropical in my car.

I write this to you from an undisclosed location, where no one can hear the sounds emanating from my stomach. If you don’t see me at the next author event, do not send help. It’s too late.

Save yourselves. And someone throw away the chicken in the left hand drawer of our fridge. It’s angry. Oh, Fitbit. You may be small, but your ability to make me feel inadequate knows no bounds.

Let’s examine how an object that weighs an ounce can impact my day.

6:22AM: Glance at Fitbit, smugly judging me as I pant from animal chores. 331 steps, Terry. That isn’t very good, Terry. I’m not laughing with you, Terry. I’m laughing at you,Terry.

7:50AM: Arrive at college, park. Begin lumbering across parking lot to go teach, recall I wore boots and boots are stupid because I’m not a cowboy or a guy in a disco in 1985.

7:55AM: 1273 Steps. Now we’re cooking. A mere seven thousand-ish steps to go for my lower goal. Nine thousand for something legit, and fourteen thousand if I want to feel smug.

11:15AM. Switch into running shoes and walk at a sedate elephantine amble around the trail on campus. Sweat. Squint. Do some pushups, but out in the distant parking lot so people can’t see me and think I’m a douchebag who wants to brag about doing 18 pushups. CROSSFIT, BRUH. #no

* The pushups are so that I don’t get man-boobies. It works.*

1:42PM Exactly Get out of car after parking in pickup line to get my son from school. Begin walking around school and neighborhood to get more steps on Fitbit, which is still blinking in a judgmental way. Realize I “fit the description” for every serial killer, make effort to wave and smile in friendly manner at every car that passes by.

2:36PM Get back in car. Drink water like I just got off a raft at sea for six days. Curse that my metal cup isn’t larger. Turn on car, air conditioning, continue to sweat like a train that has cut power but won’t quit chugging. Look at Fitbit, tap in disbelief. Tap again. Resolve to walk laps through the living room until midnight if necessary.

8:09PM Son is in bed, singing, bouncing, and twirling covers like a member of a caffeinated color guard in a marching band. Look at Fitbit. 15,583 steps? Pump fist. Dad victory. Glare at Fitbit. Resolve to do more the next day, if I don’t fall asleep after eating lasagna.

The moral of the story?

Wanna be friends on Fitbit? #Shamespiration Our son Teddy turns nine today. His birthday is the culmination of a series of surprises, that include (but are not limited to):

Becoming a dad at forty, when my entire life had been spent in service to myself, not others.

The surreal experience of my bride and I being sent home with a live human being in our red Mustang, and wondering, “What the hell do we do now?”

Discovering that, for the first few months, he didn’t do very much; sort of like an exceptionally cute inchworm with toes.

Watching him grow. Alarmingly fast. Like, “Your four year old will need you to help him shave soon.” That kind of fast. Missy is very tall. I am tall. We’re all tall. Teddy is really tall. He’s five feet tall, with no end in sight.

Learning that kids tend to run around naked. A lot.

Finding out that due dates for babies are a “serving suggestion”, as he arrived six weeks early, when I had the entire bathroom ripped out and our toilet sitting over a crawlspace. It had quite the frontier feel, but with 85% more possums and raccoons.

Watching him develop a love for kittens and puppies as naturally as if it were his calling.

Seeing the first time he told a joke, and it was funny.

Holding hands with him as we walk, and wondering if I will ever be more needed (or happy) in my life than in that moment.

Seeing his mother in him, as well as his grandmother, and me, and a line of wonderful people who all comprise part of him; but knowing that he is utterly unique.

Wondering who he will become, but also fearing the passage of time.

Standing quietly in the kitchen with my wife, talking about him in hushed tones because he amazes us.

Feeling my purpose realized, fully and with complete joy, and being thankful that I get to see him grow.

Happy birthday, Teddy. You are the best thing under the sun. We love you.

Where I’m at in life today:

I plan on writing in the car at the pickup line. I arrive about an hour early to get Optimum Line Placement, assuring that my son gets in and we take off with near military precision.

Side note: If you told me to invade a country and gave me whatever resources I’d need, I would select the teachers who supervise the pickup line. I could have my forces in Moscow by noon. They do not play around when it comes to getting the kids on their way.

Ok, so I’ll write a chapter today– around 1500 words. The fuel I’m choosing is white carrots, purchased from the Hendersonville Produce Stand. It’s the kind of place that has fruits and vegetables that look real, rather than the polished, waxy approximations of food in some stores. I like the irregularity– it’s the same in people, I think. It’s the cracks that make us good, to quote Dozer from the book Heartborn.

Why white carrots, Terry? Welllll, glad you asked. I really dig parsnips, and these are rather like them. Add a touch of butter, salt, pepper, thyme. Roast until tender. Add protein of your choice. Boom. Writing fuel, or fuel for whatever you’re doing.

In my case, it’s writing. I’ll report back on the efficiency of carrots as Fictional Fuel.

There are three species of animals in this house.

I am, at various times, tasked with waking/relocating these beasts as demanded. Cats are the easist; I make cooing noises in my ridiculous pet voice, they glare at me, flick their tails, and leave.

Dogs are a bit more complex. If it’s cold outside, or raining– then they’re comfortable, and that means they have no interest in moving. I may be required to physically lift and transfer them to another area. I may bribe them with food (usually what I’m eating) or I may coax them on the rare occasions they’re feeling charitable.

The kid is a different story.

For one thing, I feel an enormous sense of wonder watching him sleep. Yes, it’s vaguely creepy to hover over my spawn and keep repeating, “Aww, would you just look at him!”. If he were older, he’d most likely open a baleful eye and ask me to stop making him feel like the subject of a study on overbearing parents.

More often than not, what I feel is guilt. Here’s the kid– five blankets, all strewn about like a crime scene after a hurricane, limbs in positions that would make a Yogi proud, and gusty sighs of contentment. Here I come, ready to disgorge him from this toasty nest and ask him to go to school. I don’t like doing it. I’d rather drink coffee and let the kid sleep, then start school at a civilized hour– around ten would be nice– and do away with the feeling that I’m some cruel warden who works in reverse. Winter mornings are the worst. I certainly don’t want to be up and out among eight hundred screaming kids, why would he?

Today, he slid from bed and thumped across the floor with a half-smile. It took a little of my guilt away. At least until tomorrow, when I have to rouse him again.

Just ten more years, kid. But for now, I might let him sleep for a few more minutes. It’s good for both of us, I think.