You’d better not screw this up. Seriously.

I’m going to give you a brief history lesson, followed with some suggestions which will be roundly ignored. We fans can trust Hollywood to do what’s right with our beloved characters and stories? Right?

Now that we’ve ll caught our breath after a long, maniacal laugh, let’s examine some recent history. I love Lee Child’s Jack Reacher books so much my wife and I named our Basset Hound “Jack Reacher”. Incredibly, our hound is roughly the same height as Tom Cruise, who is a delightful performer but is NOT SIX FEET FIVE INCHES TALL. Let’s look at the evidence:

And here is the actual hound: note the similar elevation:

I rest my case. Way to go, Hollywood. Just hose the fans down with explosions and hope for the best.
I’m also a lifelong fan of Clive Cussler, who was nice enough to write me a return letter some fifteen years ago. Dirk Pitt is my own literary James Bond, and yet, the film that was made (Didn’t see it? Don’t worry. Nobody else did, either) not only tanked the series, it assured Clive Cussler would never again trust anyone from California. Way to go.

Which brings us to The Dragonriders of Pern.

I love everything about these books. Anne McCaffrey shaped an entire generation of readers of which I am one. I love Pern. I love her dragons. I cheer for her concepts of honor and duty, and read and re-read the books almost yearly. This is one of the longest relationships of my life– I was given my first McCaffrey book in 1980, by my friend Tim McCoy. I still have it.

When I speak about my passions, the world of Pern is among them. It took me four decades to become a writer, and about ten seconds to figure out the dedication of my first novel that had dragons, Banshee.

Even he majestic cover art of Michael Whelan  withstands the test of time. His vivid colors and sweeping vistas tell the reader that this story is big. Here is his vision of Lessa on Ramoth. If you don’t know those names, you should. 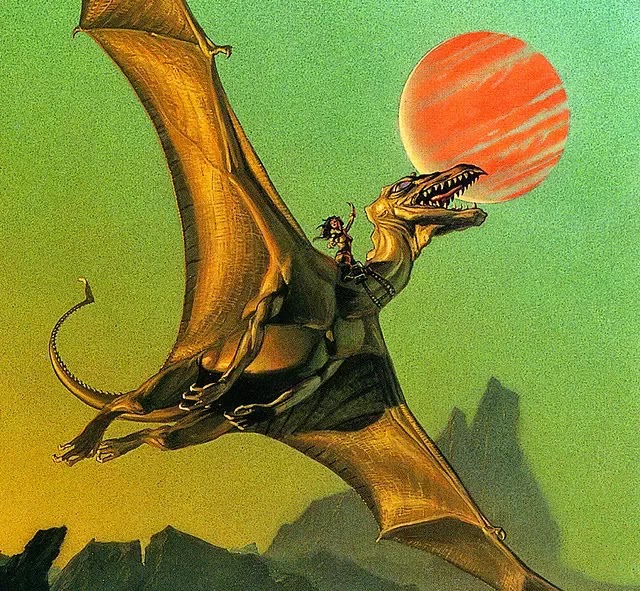 So, here we are on the precipice of a movie.
Warner Brothers has optioned the film rights and assigned a writer. Meet Sarah Cornwell:

I don’t know anything about Sarah, but I wish her well. Right now, I regard her with the suspicion of a parent watching someone handle their newborn child; in essence I hope for the best but expect the worst, because the ways that my precious Pern can be destroyed by modern sensibilities are virtually endless. Anne McCaffrey wasn’t just a great writer; she was a keystone in the world of science fiction as early as the year I was born. She’s among the first women to break out into the wider culture of Science Fiction and Fantasy authors– and she did so with strong characters, a world that regarded social organization as an aside rather than an ax to be smashed against the head of readers, and a narrative in which honor transcended the need for pat social commentary.
In short, she’s everything that Hollywood is not.
I know I’m not alone in wondering if the script that is written will be tortured into something that meets the current narrative of Good Society.
Dear God in heaven, the uproar will make the legions of Eragon fans look like a hiccuping baby– these books have been around for fifty years, and the fans are incredibly loyal.

And savvy on social media.

And well funded enough that I for one can imagine full page ads being taken in out in trade papers to refute any craptastic attempt to ruin our collective image of Pern.

Long story short, consider this a warning: don’t tank this story. Don’t you friggin’ dare. Don’t twist it or modernize it or do any of that horseshit that Hollywood does to great stories, and you’ll have a billion ( that’s a B, are you listening?) dollar franchise on your hands that can run for years.

We’ll be watching, but if you ruin it, we won’t. You’ve been warned.