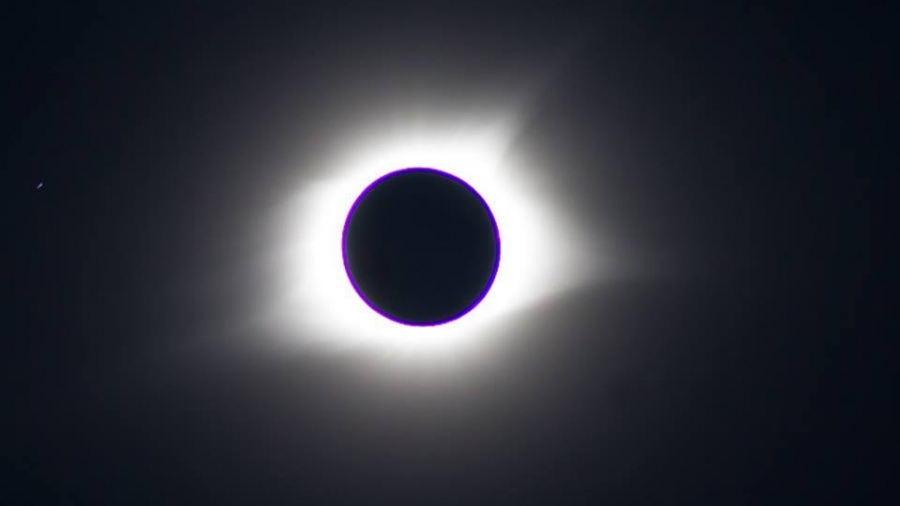 There are two events that consistently disappointed me when I was in my 20s: Halloween and New Year’s Eve.

After a massive buildup between friends and community, the evening would invariably fizzle because Halloween is primarily for kids, and New Year’s Eve is primarily for drinking alone and asking your cats if they’ll eat you after you die.

The Great American Eclipse was hyped beyond anything I’ve seen in this area, and it didn’t just deliver, it smashed my expectations in every way possible. Think about that– an event that lasted (the good part, anyway) less than three minutes has now become one of the most impactful memories of my life. We had 2:36 of totality here in Portland, TN, and it was–

The air began to still after the first nibble from the moonshadow, descending from the upper right corner of the sun’s scorching globe. It was brutally hot here, but in minutes, the day began to grow softer. The light was undefined, and more so with each passing moment. Outside, trees looked dimmed, their shadows crisp and odd. The first insects began to trill, their confusion a verbal accent to the lowered light. Frogs croaked. Birds that usually sang went quiet, and night birds perked up, early to the party.

Shadows and light took on the crescents of the eclipse. Things began to slow down. Looking up through eclipse glasses, the sun was still a defiantly blinding wedge, but shrinking with each moment we stood out in the swelter of August. There wasn’t a puff of wind; even the breeze was stopping to watch the spectacle.

Crescents through the tree, courtesy of Tim McCoy.

And then the most incredible thing happened. Every nerve in my body began to hum as I watched the sun– one second a blazing, punishing wedge of heat– be consumed by the moonshadow, eroding like a fading smile. My family was with me, all eyes upward and transfixed with the kind of wonder that only the heavens and babies can produce. The air grew still and time stopped. The diamond ring formed, a lurid gem of white-hot light that flew outward from the darkened sun, a final cheer before the curious dusk went to black.

Wife’s bestie captured this; our town was in the galactic sweet spot.

— gone. We whooped. In the distance, kids shouting, and their parents, too. Unalloyed joy at this confluence of shadow and light. The corona glowing in space, laid bare for us to see if only for a moment.

And what a moment. It was perfect, archaic, primal, elegant– in that brief, dim triumph all of the myths were believable and all the legends true. I stared up in disbelief and the visceral knowing of what hung there in the blackness. A memory from somewhen else tickled at my consciousness like curious minnows on the legs of a wading child. Every part of my sight was locked on that gloriously lurid otherness that replaced what I knew to be the fountain of life on this planet. The shadow sat smugly over the sun, whose rays speared into the darkness of space on a scale that made me feel lucky and small whether I wished to or not.

Every second of totality was perfect, except for the ticking clock that brought the diamond blazing to life on the opposite side. The ring grew, shadows faded. The otherness drained away even as my smile remained. We hugged, unsure what to do with our wiggling hands, at a loss for purpose in the memory of something so grand, but so brief.

The heat returned, followed by a storm of chatter and some internal reflection. It’s just science, right?

All of the legends were true, and they will be as long as I remember that moment of half-night, and how it made me feel.