Short favor to ask. If you read a lot of paranormal, scifi, urban fantasy, or paranormal romance, I’d like your help. If you can spare a few minutes to make a list, let me know. I’m working on a project and need some outside input from avid readers in those genres.

Emil me at terry@terrymaggert.com, and we can go from there. Thanks so much! Moonborn is here. It’s in Kindle Unlimited and Amazon. I’m proud of this one, and the early reviews are excellent. I’ve already had a few readers pick out some DEEPLY hidden Easter Eggs (y’all are smart) and it’s been a fantastic week on twitter and across my social media in general.

Get yours here: Moonborn for Kindle

Tonight, I set up at Utopiacon in Nashville, where I’ll be immersed in All Things Bookish for the next four days. I’m stoked. So many writers. So many readers. So many people giving away candy, and not the kind you get in creepy vans (writers love chocolate. and booze. and coffee.)

Blogger friends– come by for your gift. You make my job easier, and I’m thankful.

If you’re around the area, stop by- there are some seriously talented people at the event. I’ll have book candles, books, bookmarks, and as a special treat, I’ll be wearing pants. by terrymaggert with 4 Comments Uncategorized

We have somewhere between five and seventy cats. I don’t know the exact number, but it seems to fluctuate based on things like “holding a can of tuna” and “trying to write a book while using a laptop”.

Outwardly, I appear to be a dog person. We have five dogs. I love dogs. I talk to them in silly voices, or as a colleague when they appear to be listening. I run with them, nap with them, and have not gone to the bathroom by myself in nine years. (True Story)

But it’s my cats that really bring out the weird in me. Granted, I’m a writer, so that wasn’t exactly a difficult task.

(side note: every writer lives in fear of dying without clearing their web browser. we call it research, but in truth, it’s generally unhealthy fascinations with things as varied as skin conditions, hiding bodies, and why a tiger might only eat half of a person. stuff like that.)

So when we have yet another litter of rescued kittens, they begin to attach themselves to us like adorable parasitic floofs, worming their way into my daily routine with shocking speed. Naturally, I have my favorites, and naturally, some of the cats only tolerate me– after all, they’re cats. It’s what they do.

Which brings me to my recent conversation with my friend and book advisor, who is also a cat person and thus understands what life is like with miniature, disdainful lions who poop in proscribed locations throughout the house.

“Jess,” I said, not thinking that I might be weird, “I like to nibble my cat’s ears while he sits on my lap.”

There was no recriminating gasp or shock on her end of the phone call, merely, “OH MY GAHD I DO TOO.”

So, there’s at least two of us, thought I think other people will admit it once they know OTHER people are willing to come forward. It’s a circle of affirmation for Cat Nibblers, or whatever the inevitable meetings will be called.

And despite, the efforts of Sugar (he’s the white one, getting fed by my bride, The Cat Whisperer), I can now proudly announce that my tenth novel, Moonborn, is complete. I’ll share the cover soon, and more sample chapters as well.

Cat hair and all. It’s hard to be royal.

Being a queen means not belonging to yourself, I think. After studying royalty for years, I’ve come to the conclusion that it’s a job one should consider carefully before taking the crown.

Crowns are heavy, and they have a way of leaving the body with the head still attached. History is filled with the vain, stupid, greedy, and lustful regents who found themselves at the end of a sword. The wrong end.

But history is also filled with good, just, intelligent royals who also found themselves relegated to the past by violent means, often in a spectacular, horrid fashion.

I write this because I’ve been giving a lot of consideration to where Livvy, from my novel Heartborn, will go in the future.

It’s true that writers use our characters as voodoo dolls, making them endure the very worst that our imagination has to offer.

I really like Livvy, and for seventeen years she struggled from breath to breath with a defective heart. I don’t want the rest of of her life to be a mockery of that, but I also want her to ascend to the heights she’s meant to be at when the world comes calling– and make no mistake, Livvy has greater concerns than she can imagine. Or, she will have, but that’s an issue for book two and three in the trilogy.

I think the question of whether Livvy is meant to be a queen is out of her hands, and in a sense, mine. The story goes where it will, especially when characters show the kind of steel that Livvy has within her. Still, in her own words, “Weapons were meant to be used.”

I think that royalty is a weapon, but for Livvy, I want to believe she’s the one holding the sword.

I have a Publishing Assistant. Her name is Amy and she’s wonderful. We’ve known each other for some time (she’s a SERIOUS book lover), and here is her first giveaway in honor of the new book.
Amy’s Giveaway
One of the items is this lovely bracelet, made by my friend Kelli Clark Brown.
Enter, win, share with friends, all that stuff.
And say hi to Amy!
Cheers,
Terry
by terrymaggert with No Comment booksevents

With apologies to my wife, who I disturbed with my revelation as she attempted to eat cheese and crackers in peace.

I’m writing a new book and it’s unlike anything I’ve ever done. The feeling I have while writing this book is surreal– I had to dredge deep to find a similar sensation, and the closest experience has been on an occasion where I was playing basketball and felt like I couldn’t miss. Let me clarify, here– I was a remarkably average basketball player, but I was enthusiastic. However, on one night in 1985, I was unstoppable.

Falling to Her is already beautiful. It’s about a young woman named Livvy who is different from every other person who have ever lived. You see, she was born with half a heart, but she’s survived to the age of seventeen– and help is on the way, but not from anyplace you might expect. If you have to classify this book, it would be YA Paranormal, but that’s up to you. It will be available on September 1st, and I can also confirm something really exciting:

Audible narrator of the year Julia Whelan will be performing the audio version. You may recognize her name from Gone Girl. Needless to say, I’m over the moon. Take a listen to some of her work here:Julia Whelan, Narrator of the Year

Then, there’s Livvy.  Let’s meet her.

It’s an exciting year; filled with great news. Hope you’re excited. That’s all for now, I’m off to write.

It’s here. Halfway Bitten is available for Kindle, and priced at .99 for the new release. It’s the best novel I’ve written and I think you’ll love Carlie, and Wulfric, and Gran– and all of it.

Here’s a taste of what you can expect:

The circus came to Halfway, and they brought the weird.
When clowns, vampires, and corpses start piling up in town, Carlie has to break away from her boyfriend, Wulfric, to bring her witchy skills to the table- or grill, as the case may be.
When the body of a young woman washes up in the lake, it unleashes a spiral of mystery that will bring Carlie, Gran, and Wulfric into a storm of magical warfare. Spells will fly. Curses will rain. Amidst it all, Carlie will make waffles, protect her town, and find out if a man from the distant past can join her in happy ever after.
With love and honor at stake, Carlie has no peer.
Click here for your copy, or to give to any fan of the paranormal, fantasy, or thrillers:
Halfway Bitten: Your next great read.
Be sure to tell me your thoughts about Carlie and her world; I love hearing from readers.
Cheers for now, and happy reading!
Terry 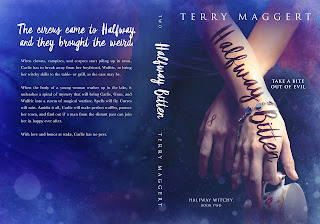 That’s it– you can review on Goodreads, or on Feb 9th at Amazon, or wherever you’d like. The more locations, the more chances to win.

Thanks for helping me make this my most popular book to date!